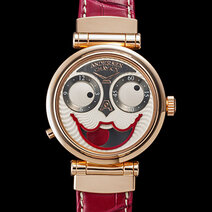 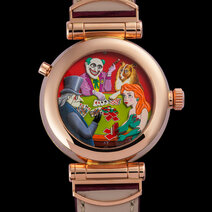 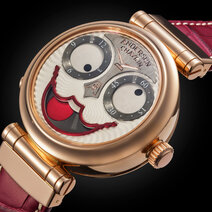 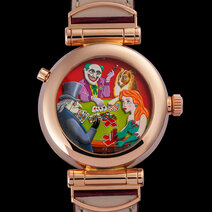 When two members of the Académie Horlogère des Créateurs Indépendants get together to make a watch, the result is unlikely to be anything less than spectacular. Russian watchmaker Konstantin Chaykin showed his Joker watch at last year's Baselworld. The hour and minute counters, at 2 o'clock and 10 o'clock, double up as eyes while the lolling tongue at 6 o'clock is also a moon-phase display. Svend Andersen, meanwhile, presented the Poker; an "à tact" watch whose back is decorated with a miniature based on a Cassius Marcellus Coolidge painting of dogs playing poker. In 2018, these two independents have combined inspirations in the Automaton Joker. The dial side is the same as the original Joker watch; the novelty is on the back. Andersen, a Danish watchmaker working in Geneva who has made a speciality of erotic automata watches, has imagined a scene with four characters around a poker table. A press of the pusher at 8 o'clock, and the Joker's eyes, the dog, the man and the woman come to life for almost two minutes. Every single element is cut and painted by hand. 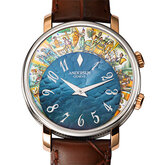