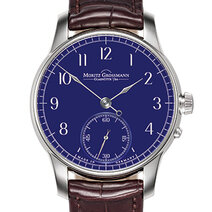 Watchmaker Moritz Grossmann returned to Glashütte - in spirit at least - in 2008 with the creation of the Moritz Grossmann brand whose first timepiece, the Benu, is named after a phoenix in Egyptian mythology. Ten years later, the firm is releasing two anniversary editions of ten pieces each: one in platinum with a blue Grand Feu enamel dial and another in white gold with a black Grand Feu enamel dial. A sapphire caseback puts Calibre 100.1 on full view. Highlights include the distinctive three-quarter plate, the balance cock - which for this special occasion is gold rather than the traditional German silver - and the snailed ratchet wheel: three hallmarks of watchmaking in Saxony. 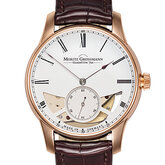 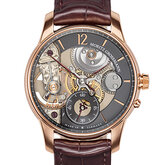