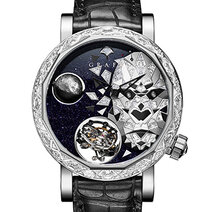 This collection of five pièce unique watches can be described as one of the most ambitious projects ever undertaken by Graff. The dial of each one is set with gold and precious stones using diamond marquetry, a technique pioneered by Graff. Shaped pieces of gold, some set with diamonds, depict the heads of five animals which are listed as endangered by the World Wildlife Fund (WWF). The gorilla, one of these five endangered species, is depicted in a 139-piece marquetry against a blue aventurine background. The case is also invisibly-set with diamonds. Unsurprisingly, the movement is on a par with the métiers d'art at work here; it incorporates a double-axis tourbillon and a three-dimensional moon phase. The latter, a white gold sphere whose surface is hand-engraved with lunar craters, makes one complete rotation in 29.5 days to follow the moon's phases. A power-reserve indicator completes the picture. 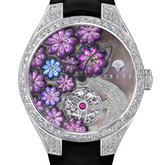 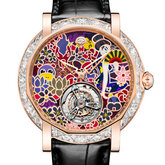