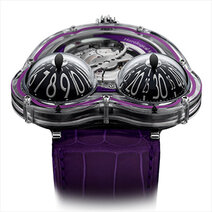 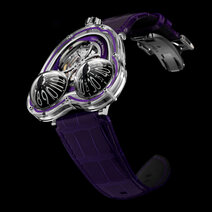 2009 saw the first appearance of the HM3 which returned, the following year, as the HM3 Frog: so-called because of the “bulbous eye” rotating domes that show hours and minutes, and the wide “mouth” that reveals the movements of the brand’s signature battle-axe winding rotor. Ten years on, the HM3 Frog is back in this X version, cased in sapphire crystal and concealing a Secret message. For this latest rendition, proposed as three limited editions of ten pieces each, in blue, purple or turquoise, the date is replaced by an enlarged rotor. Super-Luminova® is applied to segments under the rotor and on the rotating domes. But what of that secret message? When viewed from a certain angle, light rays hit the metal crown to project a microscopic rendition of MB&F’s iconic battle-axe.