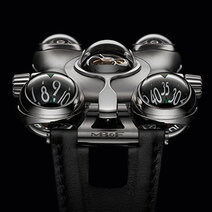 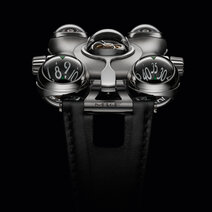 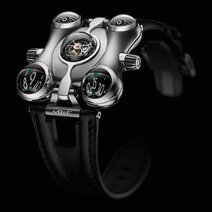 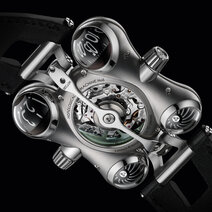 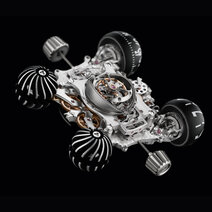 This sixth Horological Machine from MB&F is inspired by the Japanese anime Captain Future, whose hero travels through space in the Comet, a vessel composed of two spheres joined by a tubular gangway. Putting two Comets together produces Horological Machine No.6 with semi-spherical hour and minute indications rotating at 90° to the movement. The command station is taken up by a tourbillon under a sapphire dome; lubricating oils are protected from harmful UV rays by a retractable, semi-spherical shield that is operated by a crown on the left side of the case. Completing the "engine", twin turbines, each with 15 curved blades, are driven by the winding rotor.