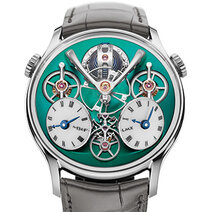 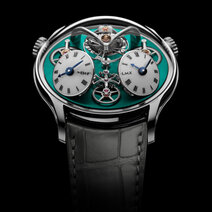 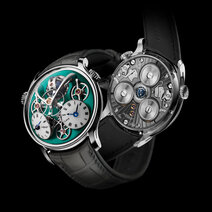 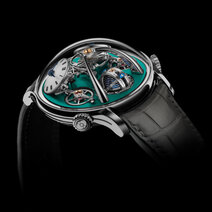 How long before a brand gets to celebrate its heritage? Ten years, says MB&F, which this year marks the first decade of its Legacy Machine with the LMX. This 33-piece limited edition in titanium revisits the most salient features of the very first Legacy Machine, released in 2011: a sapphire dome, two independent time zones on lacquered dials, now inclined at a 50 degree angle and, as though floating above them, a huge flying balance. Among the new features is a three-dimensional, rotating indicator that can, at the wearer’s choice, show the days of the week or count down the seven days of power reserve provided by the in-house, manual-winding movement: the eighth developed for the Legacy Machine during its ten-year existence.