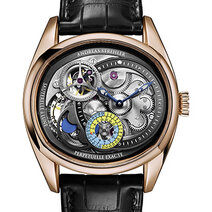 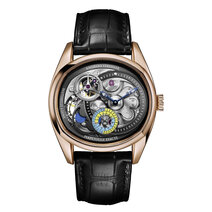 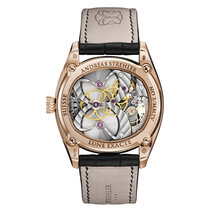 Andreas Strehler already took mechanical performance to the next level when he revealed a moon phase so accurate it would theoretically require no adjustment for two million years. Now the independent watchmaker has raised the bar again with the addition of an unprecedented mechanism that indicates the age of the moon to within three hours. Of course, such a feat serves no purpose if it cannot be clearly viewed, and so alongside the conventional moonphase display, Strehler has included an ingenious vernier moon scale, comprising two concentric discs with scales showing the age of the moon in days and three-hour increments. As an ultimate mechanical refinement, and to guarantee incomparable precision, the movement is equipped with a patented remontoir d'égalité. By doing away with the dial, this Lune Exacte reveals all of the spectacular workings behind this extraordinary accomplishment. 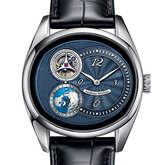