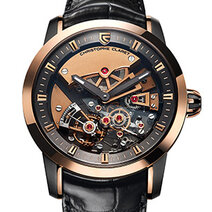 This new timepiece, which is equipped with a traditional pivoted detent escapement and constant force, bears testimony to an important aspect of horological history. This type of detent escapement first appeared in the eighteenth century and was a common feature of marine chronometers. It is considered as the quintessence of chronometric precision. Transposing such an escapement to a wristwatch is no small feat which Christophe Claret has achieved thanks to a series of complex technical solutions, three of which are patented. Maestoso's two barrels are each fitted with two superimposed springs. They release the energy required by the escapement while optimising the watch's power reserve of more than 80 hours. Three limited editions of 20.