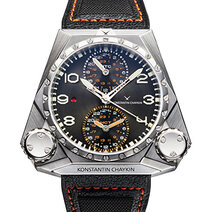 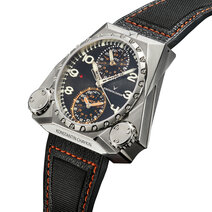 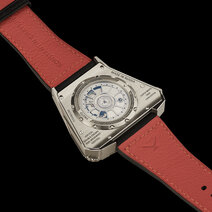 In 2017 Konstantin Chaykin embarked on his very own "Mars Time" programme. This led to the Mars Conqueror Mk1 prototype whose nine complications included a number of astronomical functions based on the Martian time and calendar. Chaykin has now unveiled the Mars Conqueror Mk3 Fighter, a blend of military and futuristic design made with the prospect of human colonisation of Mars in mind. All functions - manual winding of the movement, setting of local (Earth) time, and setting the second time zone indication (UTC) and the Martian time indication (MCT) - are controlled by the two vertically mounted crowns, with a function indicator for ease of use. Hours, minutes and seconds on Earth are shown by central hands. At 12 o'Clock, a subdial indicates the second time zone over 24 hours. In the subdial at 6 o'clock, a patented module, developed by Konstantin Chaykin and comprising 125 parts, indicates hours and minutes of Martian time. 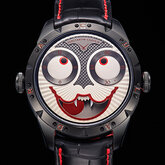