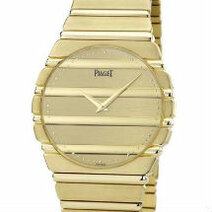 From its home in La Côte aux Fées in the Neuchâtel Jura, Piaget had made a name in the development of ultra-slim movements. And what it had achieved with mechanical movements it could also achieve with quartz. The Polo watch, launched in the late nineteen-seventies, illustrates the advantages of being naturally slim. But this heaven-sent model had another trick up its sleeve, a detail that would seal its undeniable originality and ensure its immense success: in the most seamless of transitions, the dial spills over to become a link in the bracelet.

Created in 1976 and four times slimmer than the famed first-ever quartz, the 1970 Beta 21, the 7P calibre was quite simply the world's thinnest movement. Much was made of its diminutive size - just 3.1 mm high - and the fact it nonetheless contained the equivalent of 888 transistors. An exploit which the Polo proudly displayed, as it could change time zones without altering the position of the minute hand. Launched amid much furore, the Polo went on to become Piaget's best-selling watch until the mid 1980s, and was instrumental in bringing a new dimension to the brand.