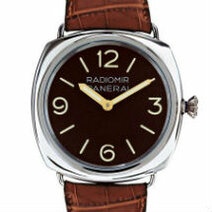 Panerai's first appearance on the international market really came in 1998, a year after it was bought by Richemont which had grasped the potential of the neglected Florentine firm. At one time, Officine Panerai had supplied diving watches to the Italian Royal Navy.

The watches it made for underwater commando units in the nineteen-thirties were fitted with Rolex movements on a Cortébert base, originally intended for pocket watches. The specific usage, and subsequent need for reliability and legibility, justified these wristwatches' exceptionally large size. The model chosen to mark Panerai's revival as a brand for the general public looked back sixty years: the Radiomir Replica was a reissue of a 1938 model, this time in a limited edition of sixty. Limited for a very good reason: each contained one of the original hand-wound Rolex movements which, of course, were in short supply. Sixty movements, still in their original packaging, had lain forgotten among Officine Panerai's stock. The platinum case of this limited edition measured 47 mm in diameter. Its comfortable size, like that of the Luminor which would also light the way for the brand's development, sparked a wave of enthusiasm for the outsize models that would lead watchmaking into the twenty-first century.