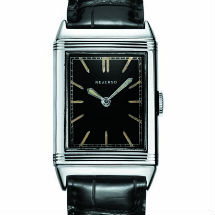 At sixty, seventy or seventy-five, the Reverso celebrates each new milestone with renewed vitality, making this a living legend among watches. Here is a model whose history casts back to another time and place, hovering between myth and reality. Though born in 1931, the Reverso is "the turn of the century". Its talent is to face the world as circumstances require, showing its solid steel back to protect its fragile glass face, this in response to the pastimes of British officers stationed in India who would kill time, and smash their watches, with flying polo sticks and balls.

On March 4th, 1931, René-Alfred Chauvot filed a patent for a case with pins that would slide into a grooved carriage and swivel on itself. Over the decades Jaeger-LeCoultre has lodged all manner of movements in this case, from its simplest to its most complicated. Its back, meanwhile, has given engravers and jewellers the ideal canvas with which to decorate and personalise each one. This ingenious and delightful rectangular watch, so very Art Deco, has moved with the times, adapting to fashion and changing size without ever sacrificing its personality. The Reverso soared to new heights from the 1990's, contributing its extraordinary success to that of a brand which, freed from its role as a maker of movements for others, could now play its own hand. As improbable as it seems today, the Reverso has not always been so revered and was on the verge of being purely and simply discontinued. It would have become not a legend but history, were it not for an Italian distributor who, with the promise of a substantial order, convinced the Le Sentier firm to have faith in its watch. Stories such as this, with the patina of emotion, are the foundations on which veritable legends are built.