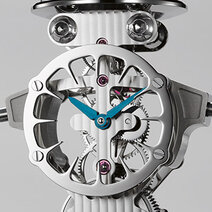 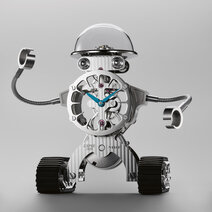 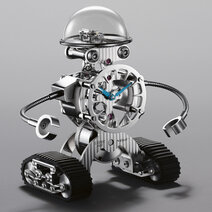 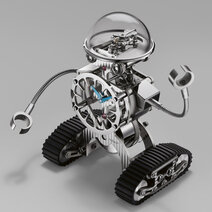 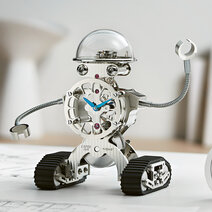 Sherman, an MB&F creation engineered by L'Epée, is a Clock inside a robot that takes its name from the M4 Sherman Tank which the Allies famously used during World War II. Robot and clock meet at every point in Sherman's anatomy. The barrel bridge extends downwards to support the caterpillar tracks; movement spacers act as shoulders, and his eyes are bolt heads supporting the regulator. The movement plates and bridges also make up the skeleton and body of the robot. The transparent blown mineral glass dome on Sherman's head reveals his mechanical brain, which is in fact the movement regulator. As his creators readily admit, Sherman only knows how to do two things, but he does them both very well: he gives the time and he raises a smile, which is probably the most useful complication of all.