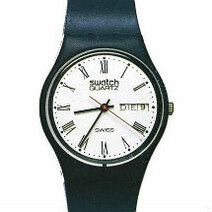 It alone sums up the Swiss watch industry's amazing vitality and capacity to bounce back after being shaken to the core in the nineteen-seventies by the advent of quartz.

Not that Swiss watchmakers had been caught unawares, as they were the ones who had developed the movements that would supplant their illustrious mechanical calibres. In truth they were overwhelmed by the industrial and commercial phenomenon of quartz, and on such a global scale. Two-thirds of Swiss watchmaking jobs went by the by and with them a unique savoir-faire almost vanished from the Arc Jurassien.

With the launch of the Swatch in March 1983, Switzerland took back the reins and reversed the trend. By creating a new craze for Swiss watches and transforming their image through clever marketing, the quartz watch, paradoxically, paved the way for the mechanical watch revival of the nineteen-eighties. The Swatch originated with the "Delirium Tremens", developed by engineers at Ebauches SA in 1979. The following year it appeared in gold and less than 2 mm high, the Secret being to use the back of the case as the bottom plate. Among the other ideas that this inspired was a project for an inexpensive plastic watch. Engineers at sister-company ETA brought it to life. With its integral plastic case, a radically reduced number of components, and a string of technological innovations to facilitate production, the Swatch immediately made its mark as a high-quality, low-priced watch. From a mix-and-match fashion accessory, the Swatch became a social phenomenon. Shortly after its birth, its parents were united in the Société Suisse de Microélectronique et d'Horlogerie (SMH) which in 1998 became, quite simply, the Swatch Group. At the turn of the millennium, the watch with a thousand faces, drawing on the creative input of artists and designers from all horizons, broke through the 333 million mark.In order to celebrate this target, an event has been organised in Lugano the 1st June 2006 with the Blue Man Group.