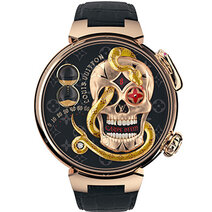 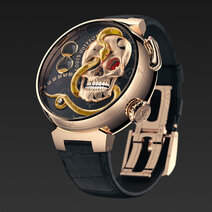 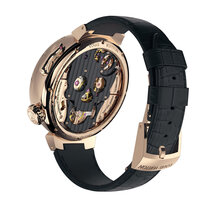 Louis Vuitton has been quietly producing automata watches for private clients for some years, but this is the first time the brand has made its expertise public with a vanitas. The very first automata, or jacquemarts in horological parlance, struck the hours on tower clocks. This Carpe Diem watch is very much a contemporary iteration in the form of a snake and a skull that give the time, without hands, on demand. When the serpent-shaped pusher, on the right side of the 47mm gold case, is pressed, the dial is transformed into a moving spectacle. The snake lifts its head to reveal an opening in the middle of the skull for the jumping hours display while the tip of its tail flicks across the minute scale, underneath the sandglass that measures power reserve. Meanwhile, the skull winks to reveal a Louis Vuitton Monogram flower in one of its sockets at the same time as its jaw opens in laughter to reveal a message: “Carpe Diem”. This animated tableau is subtly decorated with enamel and engraving. Reinforcing the theme, the LV 525 movement is in the shape of a skull, visible through the back of the Carpe Diem watch, only a handful of which will be made each year. 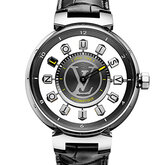 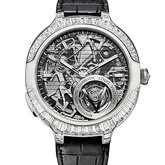 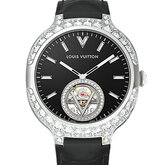 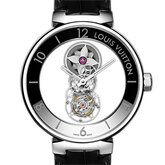 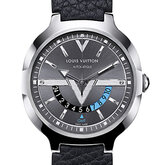 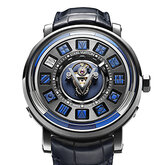 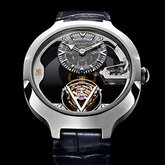 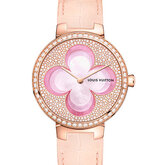 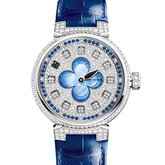 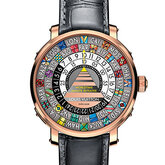 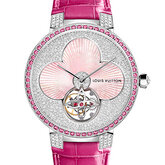 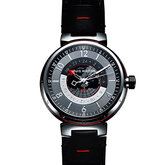