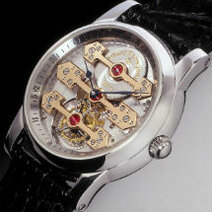 The "Tourbillon with three gold bridges" by Girard-Perregaux encapsulates the special relationship that can blossom and grow between a watch brand and an emblematic model or a technical specificity. It also expresses another relationship, that which ensures the public forever and spontaneously associate the two. Finally, it is truly symbolic of a significant evolution in the watchmaker's art.

The Président model, launched by the La Chaux-de-Fonds firm in 1991, is the continuation, or culmination, of a long and brilliant progression. Constant Girard-Perregaux presented his first tourbillon with three gold bridges in 1867. He went on to make some twenty over twenty-five years, in an era when such a complication supposed extraordinary daring and mastery. Unique in its choice of precious gold for the famous parallel bridges, this movement was of course housed inside a pocket watch. It was covered in honours before achieving the ultimate distinction, when in 1901 it was declared hors concours, its quality judged beyond compare. It reappeared in 1981 as a limited edition of twenty, before being brilliantly reincarnated and embarking on a new life as a wristwatch.