Abraham-Louis Breguet is a central figure in the history of time measurement. His inventions and production, his success in business and his study of horology set him apart. Born in 1747 in Neuchâtel, Switzerland, in 1762 he travelled to France where he would achieve fame and success. Abraham-Louis Breguet did more than instil his genius into the mechanisms of his watches; he cared equally about their exterior, hence the inimitable Breguet style which has come down through the centuries in engine-turned dials, for example, or the hands that bear his name. His most famous innovation is the tourbillon regulator, for which he was granted a patent in 1801. Breguet sought to make improvements to timepieces in all areas, and so developed a pare-chute system that would make the movement less vulnerable to shocks. He is also the inventor of an automatic winding system (the perpétuelle watch), a terminal curvature for the balance spring, referred to as a Breguet overcoil, to improve the concentric "breathing" of the spring, and the invention of the à tact watch, in 1799.

Appointed to the court of Louis XVI in 1784, Abraham-Louis Breguet's patrons included several high-ranking personalities, not least Queen Marie-Antoinette. In 1783, one of the queen's admirers commissioned Breguet to make her a now famous watch, with the stipulation that it must incorporate every one of the known complications of the day. It would be completed a full thirty-four years later by Breguet's descendents, though the queen did not live to see it. The legend took a new turn when in 1983 the watch was stolen from a museum in Jerusalem to mysteriously resurface twenty years later, during which time Breguet, the company now owned by Swatch Group, presented an exact reproduction.

Over the course of his life, Abraham-Louis Breguet was made a master watchmaker, in 1784, appointed horologist to the French royal navy in 1815, and became a member of the Académie des Sciences and a Chevalier de la Légion d'Honneur. Each of these distinctions came in recognition of the inventor and scholar, although Breguet was no less an astute businessman. In 1808, for example, he sold over half his production in Russia.

Now located in L'Abbaye in La Vallée de Joux, the Breguet brand is a worthy heir to its founder. For example, recent research has led to the development of a magnetic oscillator. The hallmarks of a Breguet watch are unchanged, as is the omnipresence of the tourbillon in collections which perpetuate the spirit of the watches of Abraham-Louis himself.

Invention of the gong spring for repeater watches. Creation of Breguet hands and numerals.

Commissioning of the so-called Marie-Antoinette watch which, after numerous interruptions, was completed in 1827. It is acknowledged as being the first Grande Complication watch in the history of watchmaking.

Invention of the pare-choc, which was given its final form in 1806.

Invention of the tourbillon for which a patent was filed in 1801.

Creation of the perpetual calendar and of the Breguet overcoil, which is still commonly used today.

The "subscription watch" with its single hand.

The first tact watch was sold.

First wristwatch for the Queen of Naples.

"Double seconds" watch or observation chronometer, the forerunner of the modern chronograph.

Death of Abraham-Louis Breguet. The company was taken over by his son, Antoine-Louis. Abraham-Louis' grandson, the physicist Louis-Clément, sold the watchmaking branch of the company to Edward Brown, whose family retained ownership until it was sold to Chaumet in 1970, then to Investcorp in 1987, and to the Swatch Group in 1999. Since then, and under the directorship of Nicolas G. Hayek, Montres Breguet SA has gone from strength to strength.

Watch without hands, with a rotating dial and jumping hours shown in an aperture.

Patent for the wristwatch with perpetual equation of time.

Patent for the moon-phase mechanism of the "Reine de Naples" watch.

Two patents for the "Le Réveil du Tsar" watch: the locking mechanism for the alarm function, and coordination of the alarm to local time.

Three patents including the new Breguet detent escapement. Launch of the "Tradition" line. 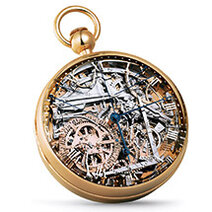 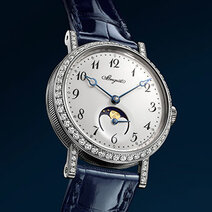